HANDSHAKE AGREEMENTS: COULD THEY HOLD UP IN COURT?

The handshake is one of the most powerful actions in business. It is a sign of proposal and acceptance, a sign of agreement, and a sign of partnership. But what happens when that agreement is broken? Every company wants to avoid business litigation. Lawsuits take time, energy, and money, that most business owners wish to avoid. However, having a lawyer draw up a contract for every single agreement that you make could also take time, energy, and money. However, if a handshake agreement is broken, a business owner may be forced to go to court. The question is if you are in a business litigation, could that oral agreement hold up in court?

What You Need to Know About Handshake Agreements 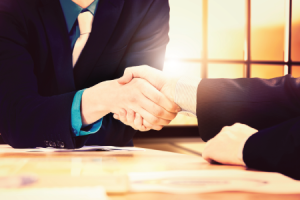 single agreement that they make in paper. But if they want to defend their handshake agreement during a business litigation, there are some provisions that they can put in place to help create a defense if ever they are in court. These are the requisites that a handshake needs to meet in order for it to be considered:

A handshake agreement will not be considered if:

Also, you need to keep in mind that your word alone may not hold up in court. You should have some other evidence that an agreement has been made. Evidence could include:

Agreements That Need to Be In a Contract

There are certain agreements that need to be outlined in a physical contract. This is due to something that the law refers to as “The Statute of Frauds”. This statute was created in order to prevent the creation of agreements that would be difficult to enforce. In order for the following contracts to be enforced, they need to be in writing:

If any of the mentioned agreements are in the works, you should make an appointment with your business lawyer to draw up a contract. Creating a contract is much cheaper, faster, and easier than going to court for a business litigation.

If you do decide to do a handshake agreement and all of the criteria are met, it may still be a good idea to place the exchange of considerations on paper. People are forgetful and sometimes simply the terms of agreement on paper will act as a reminder for both parties. If you ever have a question about an agreement that you are going to make, discuss it with your business lawyer. It is always better to be safe than sorry.